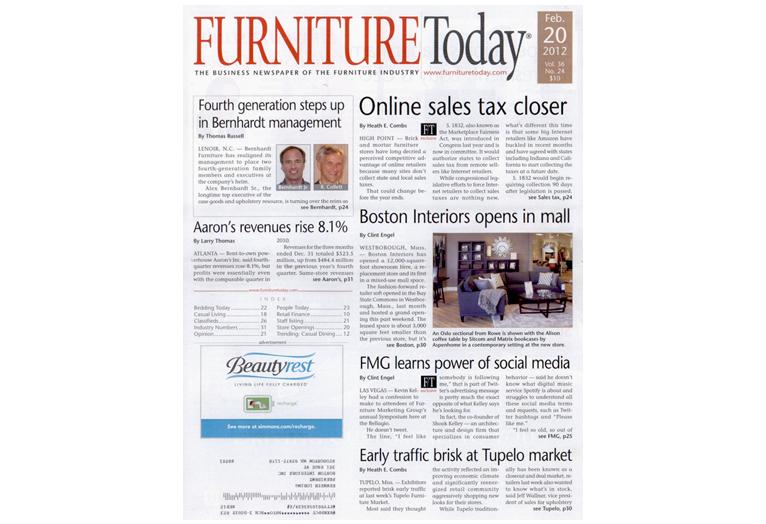 Our new Westborough location recently made the front page of Furniture Today! Check out the article below. WESTBOROUGH, Mass. — Boston Interiors has opened a 12,000-square-foot showroom here, a replacement store and its first in a mixed-use mall space. The fashion-forward retailer soft opened in the Bay State Commons in Westborough, Mass., last month and hosted a grand opening this past weekend. The leased space is about 3,000 square feet smaller than the previous store, but it's in a better location on the ground level and features a more open layout. There's no wasted space, said Ken Loring, president and founder of the seven-store midpriced retailer. "We've been in this for 33 years and we've never had such a positive response. It's just unbelievable," he said, adding that the new store was the chain's top sales performer over the opening weekend. Loring projected the store will generate annual sales of at least $5 million to $6 million and help push Boston Interiors' total sales past $35 million this year. "It's fun to see it work, especially in a down economy," Loring said. He added that the economy is starting to recover, and that the opening shows that "if you do a good job people really do respond to it. "It's not about having the cheapest sofa with a free TV," he said. "It's really about having a high-quality product and a high-quality presentation." The company invested about $200,000 in improvements, bringing the interior up to its brand standards with new lighting, wood flooring and architectural treatments that include windowed vignette walls. Loring said he's sorry he waited so long to replace the former store, which upstairs from a restaurant in this western suburb of Boston and where it was difficult for the company to create the type of high quality presentation it prefers. The store features Boston Interiors' core lineup from vendors including Rowe, Lee Inds., Max Home, Bauhaus, Riverside, Vaughan-Bassett, Ligna and Simmons in bedding. Boston Interiors is known for its custom order capabilities. All of its upholstery is made in America - something the consumer is paying more attention to these days, Loring said - and 20% to 25% of its overall mix is produced by key suppliers under a private label program. Sofa price points start at $799 and run to $1,999 for a slipcover model. "My initial read is that this is going to be one of our best stores," Loring said, and it's opening at a good time. He said business is improving, and while the upcoming national elections may throw a wrench into the works, Loring said he believes consumer may be numb from all the negative advertising and may be tuning it out. The retailer launched the new store with special discounts and financing offers, a chance to win several raffles, along with food and refreshments and the announcement of its "$1,000 New Year, New Room" sweepstakes winner. Bay State Commons mixed-used center that's also expecting a supermarket and a couple of restaurants to lease space as well.