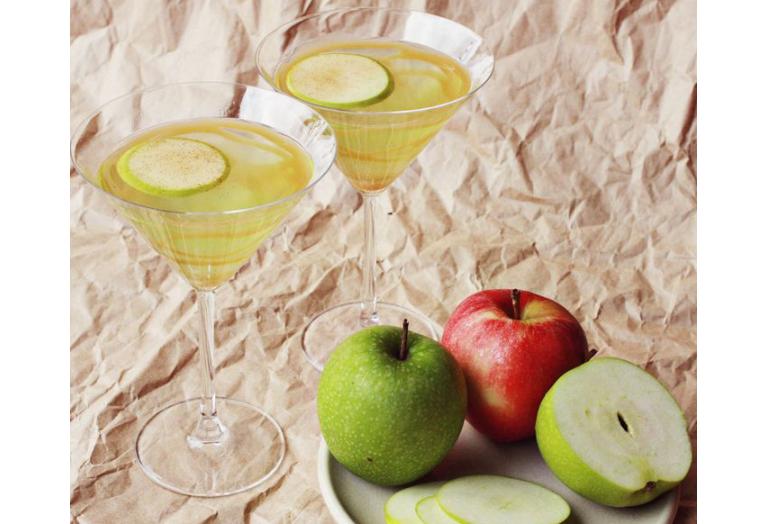 The weather is changing and we'll soon feel the crispness in the air and with fall comes the yummy smells and flavors of warm spices. Apples are in their prime now and besides being great in baked goodies they're also one of the best additions to mix with liquor, so grab some this weekend and try out any of these Autumn inspired cocktails... (image & recipe via) Ingredients: 1 1/2 oz Spiced Rum 4 oz Hot Apple Cider 1 Tbsp sugar + 1 Tbsp cinnamon combined lemon juice Preparation: Pour a small amount of lemon juice into a shallow container and dip the rim of the glass into it. Shake off excess and dip the rim into the cinnamon sugar mixture. Pour in spiced rum and hot apple cider together and stir. Garnish with cinnamon stick if you like. (image & recipe via) Ingredients: 1 ounce Grand Marnier 1 ounce gold tequila 5-6 ounces sweet apple cider orange segments and apple slices cinnamon + cane sugar + coarse sugar for glass rimming cinnamon sticks for garnish Preparation: Add a few spoonfuls of cane sugar, coarse sugar and cinnamon to a plate. Run an orange segment around the edge of the glass, then press into the cinnamon sugar mixture to coat the rim. Add a few orange slices in the bottom of the glass, fill with ice, then add the Grand Marnier, tequila and apple cider and stir to mix. Garnish with apple slices and cinnamon sticks. (image & recipe via) Ingredients: (makes 2) 6 ounces sour apple schnapps 4.5 ounces butterscotch schnapps 3 ounces gin (or vodka) 1-2 tablespoons caramel sour apple slices + cinnamon and sugar for garnish Preparation: In a martini shaker or mason jar combine half the ingredients with ice, shake and strain into a prepared glass. Repeat for the second. Drizzle caramel sauce inside the glass before pouring the drink.   For an extra festive spin on drinks place them in a cored apple and serve!